J3 Competition has over 17 years of winning experience in America across all major organizations, championships and categories.  From major cadet championships alongside junior championships as well as single speed senior categories and premier shifter titles.  The team’s efforts since its inception in 2004 have been second to no other brand, thus galvanizing the company  as a continental and world leader in the sport of karting.

Through the years, J3 has leveraged its founder’s knowledge and expertise ranging from driver management, engine tuning and business expertise to offer its clientele the best in material and service offerings.  At the onset of the brands competitive existence in 2005 the team took multiple prestigious wins and titles setting the stage for has been a remarkable record-breaking and industry changing tenure both on and off the race track.

With product evolution and the relentless attention to detail, J3 began its further developments within the product creation sector of karting approximately starting in 2008 .  The brain-trust furthered its movement in 2014 with the decision to design and homologate its own chassis line — COMPKART [‘Comp / ‘etition’/ – Kart].  With the birth of COMPKART, the team at J3 enjoys renowned titles on four continents (N. America, S. America, Europe, and Australia) alongside its dedicated partners who utilize arguably the worlds best all-around performing racing kart line, there is no end to the bright future of the company. In 2018 the team took on the distribution of the BRP-Rotax product line suite for the United States in an effort to stabilize and grow the foundation of the sport with high performing and cost-effective products.

The quest for excellence through efficiencies are core principles that will guide the company on its continued journey into a new decade.  With a growing internal emphasis on product refinement alongside empowering B2B partnerships while increasing the company’s existing client services will be top priorities.  With new technology investments alongside added brand member service structures, the team is sure to set new targets and raise the bar again within the karting industry.

With a core responsibility to its COMPKART and BRP-Rotax portfolios the staff will work both entities independently to grow and reach its objectives and meet client demands.  A slimmed down Race Department will give way to more one:one service while enhancing the development curve of all COMPKART products with the intent to provide the best possible one option per category chassis line on the global market.  New growth markets will be enhanced and reached with its BRP-Rotax portfolio providing the highest performing:low-cost karting concept on the present market. 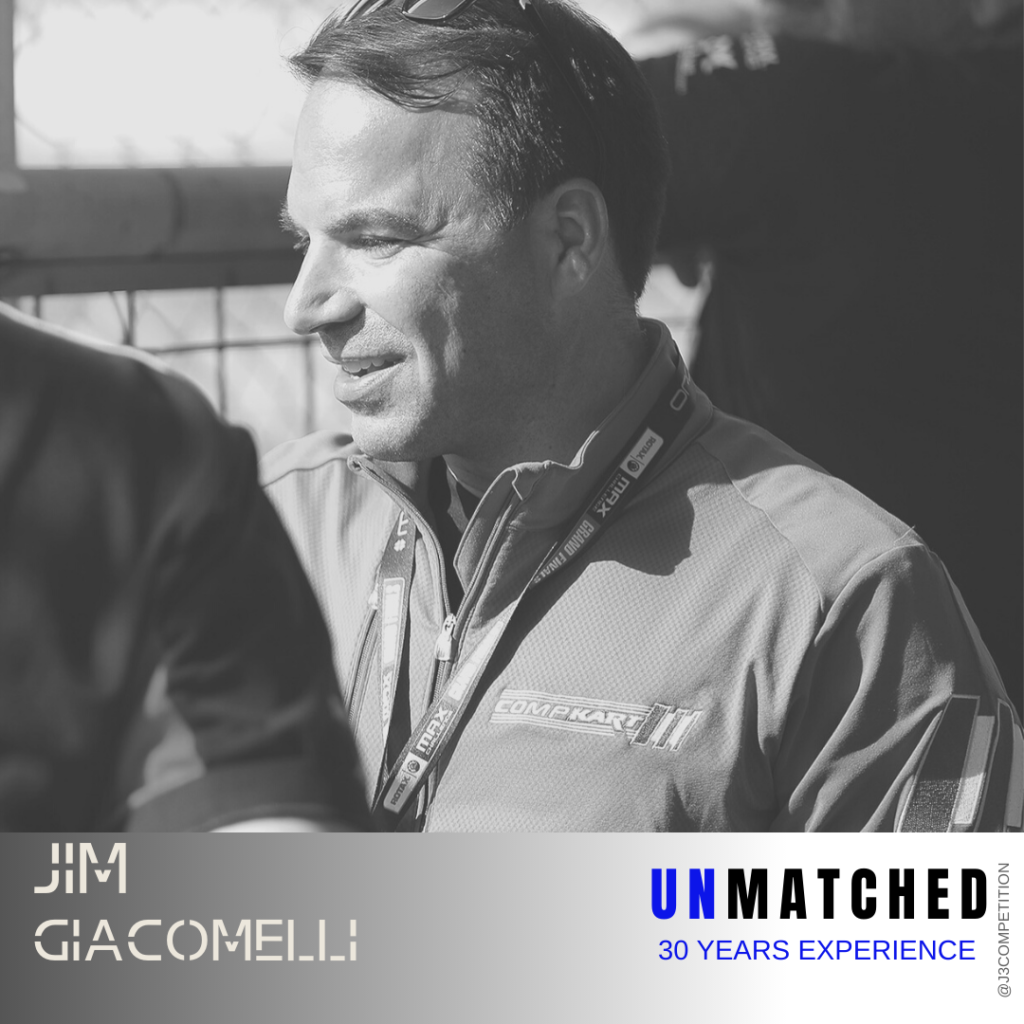 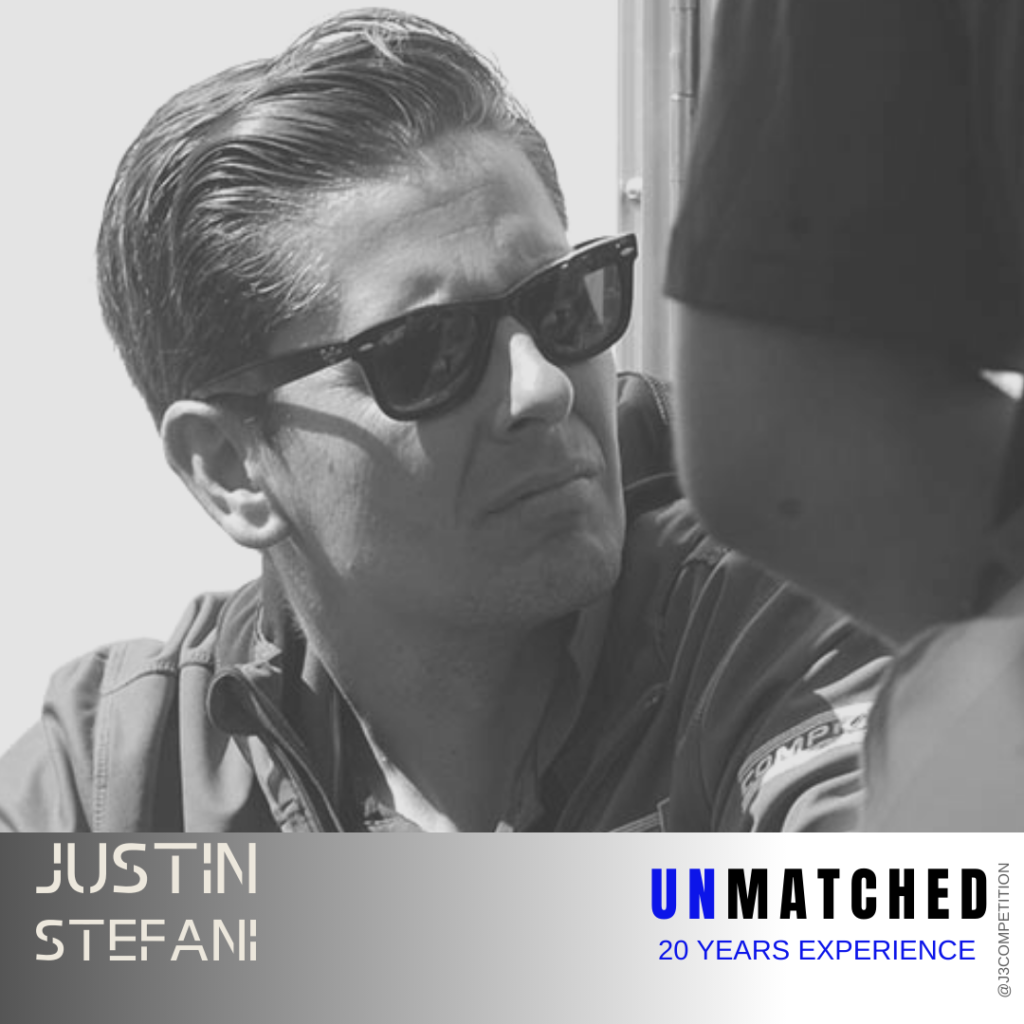 J3 Competition is formed between Jim and John Giacomelli and Justin Stefani.  The newly formed company based in Pennsylvania incorporates the successful  J & J Racing brand to take on a new long-term mission into the future for Karting in North America.

J3 Competition announces the distribution of Kosmic Racing Kart for America.  At the time Kosmic Kart is the  main brand apart of the then TONY/KART Srl production system. J3 convinces the brand to release the ‘T9’ model which the brand utilized alongside the two-piece ‘T8’ model to many victories in ’05. Additionally the team takes on a move to import the Vortex Engine brand utilized officially with its Race Department alongside the German carburetor manufacturer Hubchen.  The brand ends the year with the nations #1 driver alongside two WKA National Championships and multiple Stars of Karting victories and stabilized the market with confidence in products produced at the TONY/KART factory.

The company expands its sales network as well as enlarging its Race Department with a new innovative  structure of organizational professionalism, which becomes the new standard in North American karting.  The brand enhances its daily activities as well as its Race Department traveling to the western USA to compete with a young crop of drivers. The brands cadet and junior categories begins to bear fruit. Additionally, the staff maintains its engine program in-house with a key focal point on the Vortex RVA and RVS platforms.

The introduction of the ‘TaG’ engine concept sees J3 Competition focus on the Vortex RoK program whereby the staff provides the first ever product knowledge packet for ownership creating value-add to the market, another real first.  The staff supports an enlarged network  with wins in the prestigious Stars of Karting championship alongside strong market presence and track-side support for the entire OTK product line propelling the brands presence in American and giving enormous customer confidence.  The staff ends the year returning to SKUSA Super Nationals for the first time and enjoys being on the podium.

The introduction of the ‘TaG’ engine  all but takes over the USA and sees J3 Competition focus on the Vortex RoK ‘TT’ program. The staff develops several items for performance and service for the Vortex engine line and takes the Stars of Karting Championship (Cabrera) and stamps multiple wins across the USA including the competitive JICA category.  The staff begins to make investments into its technology with tooling as well as business technology to push its positions further forward.

The brand takes three prestigious Florida Winter Tour Championships alongside its national presence. Also the team now starts with Rotax competition and in its first year the team fights for victories in the FWT with Madrigal.   The team also takes its young driver Tristan DeGrand to compete in WSK events with success racing against the likes of DeVries, Sianz, Kyvat.  Additionally the staff starts its own line of accessories marked by the brands ‘Bars Logo’ where at the end of the season the team provides the products to the end-consumer with a clear and open B2C concept.

2010 marks a big advancement for J3 as a continuation of dominance with the team winning the CKI Winter Championship as well as working  with the Rotax campaign in America.   The team takes on the CKI national championship again and wins several events alongside the Pan American Championship with DeGrand and then Rotax Nationals with Palmer & Madrigal and the FWT championship with the Swede Rasmus Lindh.  Next up is the WSK (World Series Karting) where DeGrand grabs the first junior international podium for an America junior driver, standing alongside Max Verstappen after a hefty duel. The brand competes in it first Rotax Grand Finals (LaConca, Italy) and finishes 14th in Jr.  Also the first to compete in the RoK Cup with the Mexican driver Patricio O’Ward, managed by J3 ended the final in 4th in Lonato, Italy after a strong battle for the win! The team heads to the Super Nationals and Wins Mini 60 with O’Ward and Masters with Nienkotter.

The team creates a revised structure with improved distribution and partners with key drivers and expands back into the Mini categories.  Team takes FWT Vice-Championship in Mini max while posting important results in Sr. Max and Jr. Max as well as creating a turn-key trackside sales operation.  The team moves to a new 5,000 sq. ft warehouse to better handle its distribution as well as Race Department. The brand takes several trips to Europe for both Rotax and RoK events with Guenette missing podium at Euro Max (p4 Angerville, France). Again the team qualifies for the Rotax Grand Finals with Canadian Guenette and the brand takes another strong finish in Abu Dhabi (UAE) (p12).  With the addition of several product lines as the sales team grows the brand again and finished the year with yet another Super Nationals victory!

The landscape sees J3 expand its brand presence and track side operation with a new sales unit!The full introduction of several proprietary items designed for both OTK karts as well as the entire industry takes off.  Most notably the first-ever ‘Skid Plate’ is designed and sold worldwide by J3 in several colors fully injected molded.  A streamlined Race operation pairs with advanced track-side sales again as the team travels to compete across the US including Canada winning in the ECKC (Bressan).

The full decision is made from January to enter the chassis homologation scene with its own private label brand.  Working hard all year in the background the staff develops a complete new brand ‘COMPKART’ to have ready for FIA homologation as well as launch at the 2014 SKUSA Super Nationals with its drivers.  A successful launch in Las Vegas sets the stage for the future with Bresan (KZ), Nienkotter (Masters), Eves (J3) all setting the tone upfront in the marquee event. The brand immediately takes notice and starts to move forward with momentum into the new season.

With its first full season of COMPKART the brand enjoys drivers such as Mars, Eves, Bressan and Nienkotter winning domestically.  Notably Nienkotter dominates the FWT in Rotax and Bressan in USPKS (IAME). The team further develops its materials throughout the season and refines its selection and welcomes young David Malukas to the brand in the summer and competes at the X30 World Championships with BN Racing aboard COMPKART and wins the X30 Junior World Title!  The staff adds COMPKART Australia and COMPKART Ecuador to its list of international partners with strong momentum heading in to the new season.

With a refined chassis combination for 2016 alongside upgraded proprietary chassis components the team focuses on the year in its entirety and is able to grow its distribution network with the addition of KKC Kart shop alongside continuing its winning ways in USA, Europe and Australia. Team wins the Australian Championship (Car), US Rotax Open Championship (Garrison), SKUSA PKC Championship (Yu) and podiums at Super Nationals with Car & d’Orlando among several other high-level results as the brand sets new records in its growth strategies.

Continuing momentum from 2016 the staff wins in America immediately at the FWT and continues its progression with added dealers around the world and America.  The expanded partner network begins to push and win in some of America’s most important regional markets while the brand continues it presence winning in England and South America. The staff puts an effort in to bring brand awareness globally by taking three drivers to compete in Europe at the most important CIK events with d’Orlando and Garrison making finals in OK category.  The brand qualifies at X30 World Champs on pole in X30 sr (Yu) and takes two wins at the SKUSA Super Nationals Car & Walton.

With success mounting the brand expands its global presence and the on-track results compile. With new technology the staff provides online portal for B2B and B2C members strengthening the business foundation. The brand wins the British Championships, several Australian and South American events as well alongside the WKA National title in X30 Sr.  With a streamlined distribution cycle the chassis line is refined in 2018 and proves to be an improvement in performance and ergonomics for the chassis line. The parent, J3 becomes the distributor for BRP-Rotax products in USA providing a platform to grow the sport domestically with the two-cycle engine powerhouse that is Rotax alongside the BRP staff.

2019 marked a year of significant movement for the company with the first full year of its Rotax distribution.  The brand hosted three domestic events providing RMCGF tickets as well as managing Team USA Karting for the 20th annual Rotax Grand Finals. At the 2019 RMCGF COMPKART was the chassis partner for the Mini Max category hosting 36 drivers from around the world driving on the beautiful fluo chassis! Alongside growing strategic alliances the brand reached sales into Asia while competing across the globe in major events.  Domestically the COMPKART brand took several championships including the prestigious SKUSA shifter title as well as three separate organizational shifter titles.

We're not around right now. But you can send us an email and we'll get back to you, asap.